As stated here, we observed a growing gap between School and Exam averages across Alberta schools in Math 30-1. Although we cannot rule out the events are completely random in nature (only time can tell), we hereby, put forth a hypothesis. 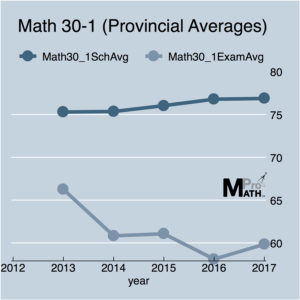 With a change in recent diploma weighing from 50% to 30% (effective September 2015), it’s reasonable to assume students put less effort into the diploma exam. The growing gap from 2015 to 2016 is pronounced. In the Economists article Effort, not ability, explains the gaps between students published on Aug 17, 2017, it reported that an ingenious experiment was conducted in Shanghai and America. Students in Shanghai (Ranking 1st in PISA) and American (ranked 37th), each separated into two groups; one group was offered monetary incentive to complete the same test based on 25 questions from PISA. With each wrong question, a dollar would be deducted. The result was head-turning. American kids with monetary reward did substantially better than the control group, which offered no reward. The Chinese counterpart exhibits the opposite – no difference was found between groups. It seems like effort, not ability has something to do with achievement results. As an educator, I can attest to that. When we offered Diploma Mock Exam to our students 3 weeks prior to exam date. Results were often disappointing and worrisome. When the same cohort of students wrote the diploma exam, they all showed significant improvements of varies degrees, leading to pleasant surprises.