Gifted, an overly simplified concept as it’s often referred to, is not something that we (normal people) can comprehend, let alone manage. Over the years, I’ve met more than a few parents with sole intentions as to put their kids into gifted programs, such as GATE. As far as I could tell, their kids were marginally gifted. It seems like they were trying to prove something, the something that I can’t quite understand.

Gifted is a broad concept. It can be defined by a simple IQ test score but there’s more to it than that. Emotional and cognitive developments are often ignored for good reasons; manage gifted kids are tough. We can’t give others what we don’t have. To make the matter worse, no two gifted children are alike. Two kids with the same IQ does’t mean they can be taught equally with the same measurable outcome. I have been teaching at the university in undergraduate and graduate programs for almost a decade and seen many smart kids came and gone.

Success in life as we know it, has little or nothing to do with the level of giftedness of which a person receives.

Whether you have gifted kids at home or not, the feature report from Calgary Herald is worth the read. We all can learn a little something out of it. 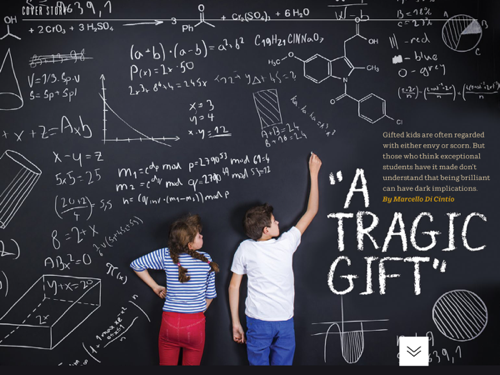 ← Are you up for the challenge?
A Wish Come True! (fingers-crossed) →